She and her partner, Josh Salzman, made their directorial debut with “Time & Tide”, a documentary about the impact of globalization and global warming on the tiny South Pacific nation of Tuvalu. The film garnered numerous film festival awards, screened internationally, and was broadcast in the US on PBS.

Julie's sensitivity to subject and subject matter was fully realized and recognized in the widely celebrated short film “Just Breathe” - a film about the power of mindfulness to transform anger, as articulated by a group of elementary school kids. The unscripted piece was showcased on Oprah's Super Soul Sunday program in April 2015, plays internationally at children's film festivals and has so far been translated into Spanish, Italian, German and Hungarian.

Currently she is developing a six-part series of short films on mindfulness; writing an animated screenplay based on the true story of the two homeless dogs she and her family adopted; compiling photographs for a book on real women's bodies; and producing the occasional television commercial. When she’s not working, you can usually find her wandering in the hills, camera in hand and dog in tow; hanging out with her tribe; or just at home digging in the dirt. She puts a tremendous amount of heart and soul into everything she does, and believes that the joy and beauty of filmmaking (and life itself, really) lies as much in the process of creative collaboration as in the actual completed projects. 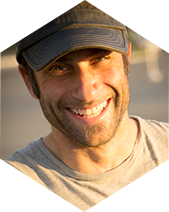 At an early age, Josh was at home with either a paint brush or drawing implement in hand. When he was introduced to still photography in high school his life was forever changed. He eventually made his way into filmmaking and fell in love with the documentary form, which paved the way for his career in celluloid and digital imagery.

Josh made his mark in 2006 with the documentary “Time & Tide”. Shot and co-directed with his wife and co-conspirator, Julie, it screened at numerous festivals worldwide, won several awards and eventually aired on PBS. He continues to co-direct with Julie, while simultaneously lending his photographic talent and skills to other directors and their projects, bouncing back and forth between the worlds of television commercial production and documentary.

He has lensed several successful television commercial campaigns including Ford, Bank of America, Pepsi, Intel, Sprint, Nokia, Chevron, American Express and others, for acclaimed filmmakers such as Stacy Peralta (“Dogtown and Z-Boys”), Steve James (“Hoop Dreams”, “Life Itself”), David Gelb (“Jiro Dreams of Sushi”) and Jessica Yu (“Last Call at the Oasis”), and enjoys building new relationships with both established and up-and-coming directors.

His most recent documentary collaborations include the Sundance 2016 premiere “Under the Gun” for director Stephanie Soechtig and Katie Couric, another Sundance 2016 highlight “ForEveryone.Net” by director Jessica Yu, and Slamdance 2016's “Los Punks: We Are All We Have” by director Angela Boatwright.

Josh’s rare position straddling the two worlds of documentary storytelling and commercial filmmaking has provided him with an invaluable approach to image making. His sensitivity for the story, combined with a keen eye for natural beauty and skilled hand in the craft of shaping light and color, help to create Josh’s unique blend of rich and immediate visuals.